Upon his return to Canada from England in 1907, Sam Steele was appointed commanding officer of Military District No. 13 (Alberta and the District of Mackenzie), with headquarters in Calgary.  While Sam moved to Calgary to assume his position, his wife Marie and the three children remained in Montreal to allow Marie time to prepare for this move across the country. She wanted to see her mother relocated with her younger brother Frank; prepare their eldest daughter Flora for boarding school in Montreal; and consider what she should bring for the new home in Calgary. Her quandary was that furniture could be purchased at a much better price in Montreal than in Calgary, but that would mean dealing with the expense and hassle of arranging to transport the furniture by train to Calgary. Adding to her frustration was that the furniture store her family always shopped at, Morgan’s department store, was not giving her the credit arrangements she had always enjoyed. After many letters written to Sam about what to do, meeting with people at Morgan’s, and checking frequently with CPR about what costs would be covered for moving their furniture, Marie arrived at a decision. She wanted to purchase the furniture in Montreal, not only because it was cheaper, but also to prevent people in Calgary from knowing the exact price of their purchases (which she said they would know if she shopped in Calgary), and she wanted to find a store other than Morgan’s to benefit from their business. In the end, Marie purchased the furniture from Labelle department store, a competitor of Morgan’s, and one owned by a French Canadian family.  Scanned below is the list of items Marie finally purchased, along with the prices she paid. 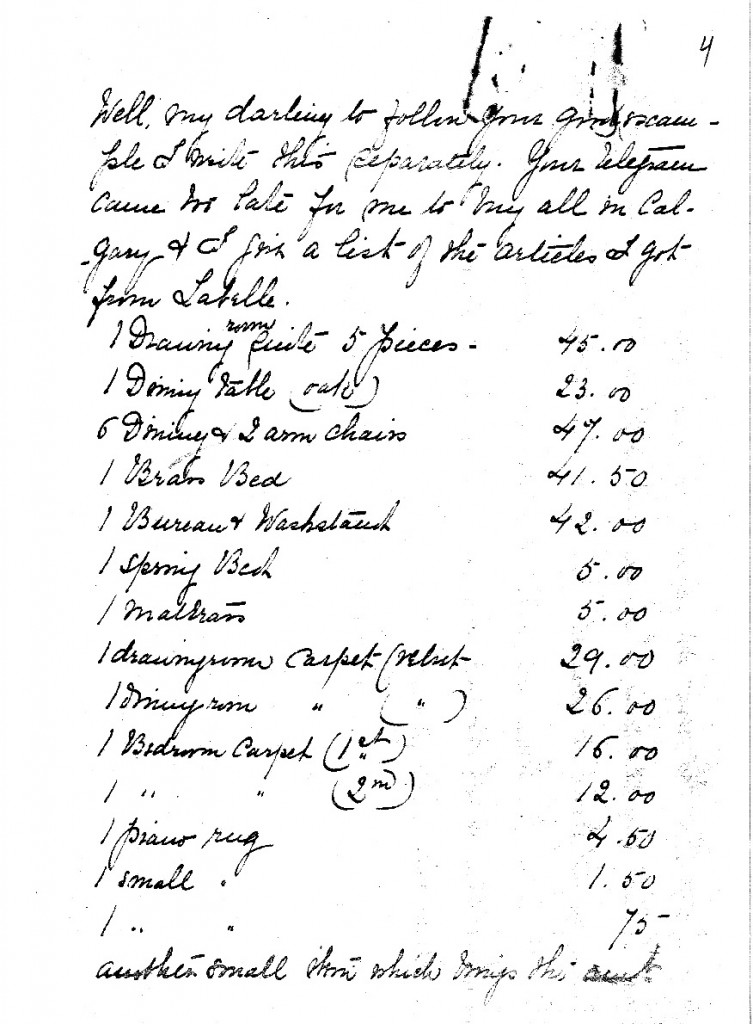 (I so wish I could buy an oak dining table for $23.00, a five piece dining room suite for $45.00, or a brass bed for under $42.00). I like too how Marie (or Maye as she is called by Sam and family), signs off this letter to Sam: “Your own tired weary wife, Maye”. Happily, the furniture was put on the train to Calgary, and the Steele family settled there until 1910 when Sam accepted the command of Military District No. 10 in Winnipeg, and the family faced another move.