*This was originally posted on Active History. 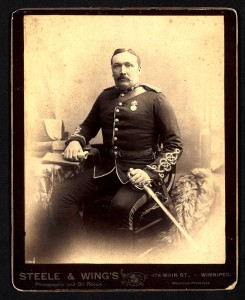 Sam Steele was the Forrest Gump of Canadian History.  He was involved in some way with the Fenian Raids, the Long March West, the 1870 Riel Uprising, the establishment of the North-West Mounted Police, the construction of the Canadian Pacific Railway, the 1885 Northwest Uprising, the Klondike Gold Rush, the Second Boer War, the First World War, the Spanish Flu epidemic, and the Winnipeg General Strike. None of the first five Prime Ministers could  make claims to have experienced that many of the key events of the country’s first fifty years!  Today Steele is a relatively unknown figure of Canadian history.  Aficionados of RCMP history know of him and there are corners of the country where his life is celebrated – like Fort Steele, BC, Fort Macleod, Alberta, and Dawson City, Yukon.  If you walked up to the average person on the street and asked “Who was Sam Steele?” they would probably give you a blank look and respond “Sam who?”

For those who remember the Heritage Minutes of the mid-1990s, Sam Steele is the stern-faced Mountie who responds to an American prospector, pointing a pair of pistols at him, with “In that case I’ll be lenient, we’ll keep this gambling gear and you’ll be back in the United States by sundown.”  At the end of the Heritage Minute, the prospector, with two Mounties escorting him back to the US, states “I coulda shot that guy right there.  Who was he anyway?”  The response: “Superintendent Sam Steele, North-West Mounted Police.”

Steele was a quintessential hero and the embodiment of Victorian masculinity at a time when Canada was striving to create a country from sea-to-sea and trying to emerge from the shadow of Great Britain.  His life parallels the major events of opening and settlement of the West, and his distinguished career with the NWMP and the military ensure his reputation was well known.  It is this reputation that led men from all corners of the country, and the US, to apply to serve in South Africa under Steele as the first contingent of the Lord Strathcona’s Horse.  Of the 2,000 men who applied in 1900, only 500 were accepted for service.  Nineteen years later when Steele’s funeral procession wove through the streets of Winnipeg, it brought the Winnipeg General Strike to a halt as workers paused in silent respect of his life and legacy.  There are few people whose passing could produce the a similar effect today. 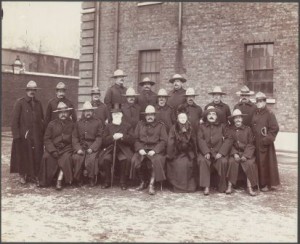 What is striking about the story of Sam Steele is that he went from national hero to relative obscurity in less than a century.  This decline presents an interesting opportunity to revive Steele’s legacy, not as a hero but as a means of conveying the first fifty years of Canadian history to the public.  The potential of the repatriated Steele collection to teach Canadian history through an individual is clear in how the University of Alberta Libraries have designed their digital and physical exhibitions of the collection. 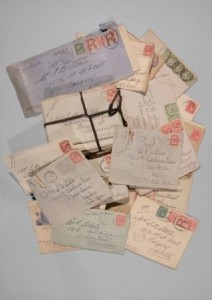 The website for the Sam Steele collection breaks Steele’s life and the collection into six sections: the Red River Expedition (1867), the Northwest Mounted Police and the March West (1873), Sam and Marie (1890), the Yukon and the Klondike Gold Rush (1898), the Boer War and the South Africa Constabulary (1899), and World War I (1914).  Each section corresponds with a notable period in Steele’s professional and private life and, as the titles indicate, each is a significant event in Canadian history.  The correlations are reiterated in the 100-foot long timeline that is a central feature of the Sam Steele: Journey of a Canadian Hero exhibit currently on display at the Enterprise Square Gallery in downtown Edmonton, Alberta.  The top of the timeline gives the key events of Steele’s life and the bottom give major events in Canadian history to clearly show when, and how often, these two lines intersect.  The rich collection of documents and photographs that is the Sam Steele Collection provides the evidence necessary to connect these two timelines and create a narrative of the past.

Through these parallel timelines, Steele becomes a tool for telling the story of Canada’s first fifty years in a way that gives it a human face.  Because Steele is no longer a well-known figure,  means when people encounter his life as a means of conveying Canada’s history it is without many of the preconceptions that come with historical figures like Louis Riel or Sir John A Macdonald.  This does not remove all political bias from the events – Steele’s advancement in the NWMP was often blocked by virtue of his Conservative political affiliations at times when the Liberals were in power – but it avoids the overt politicization of Canadian history that comes with many of the better-known individuals.  I would also challenge Canadian historians to find another person who was involved in as many significant events and has a rich archival collection comparative to Sam Steele. 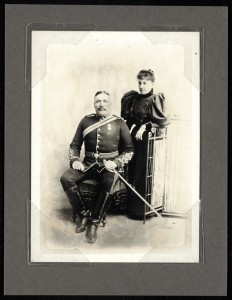